Under what circumstances should a beatloop be broken?

When beatloops are removed, it means that data about team relationships are being taken out of the graph.

So far, beatloops have only been broken if smaller beatloops with common teams were removed first. This means the system is fairly liberal about removing beatloops.

But I’ve started experimenting with another reason to break beatloops: when a beatpath contradicts a portion of a beatloop.

Here’s an example. Denver has been in a beatloop with NE and MIA: DEN=>NE=>MIA=>DEN . As a result, Denver hasn’t been given credit for its win over New England.

New England has an alternate beatpath to Miami, but that doesn’t mean much. It just confirms something that was already in the beatloop. Reinforcing a portion of the beatloop doesn’t help us.

But, what’s more interesting is that Denver has an alternate beatpath to Miami. That contradicts part of the beatloop. Since Denver has managed to develop an alternate beatpath to a team that it had earlier lost to, it essentially means that it has exposed that earlier loss as a fluke. If you break the beatloop at that portion, you have a beatpath segment to add back into the graph: DEN=>NE=>MIA . 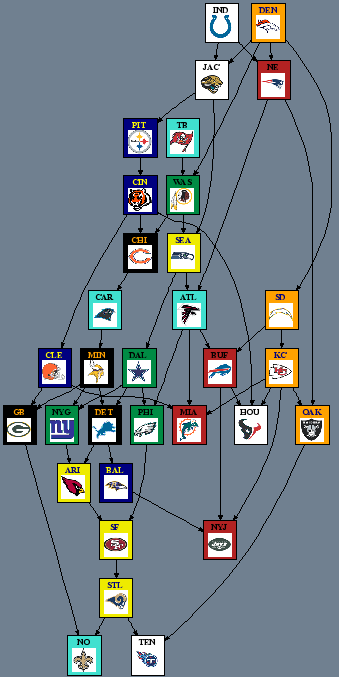 The main differences between this graph and the other post-thanksgiving graph?

I’m still deciding whether to switch to this beatpath graph style, but it looks pretty good so far. Tampa Bay really climbs up the rankings with this graph, and Seattle gets hurt.