We’ve got some miscellaneous information for the end of the college football season.

First, here is the Top 40 Graph for the teams as they existed just before the bowl season. Sorry it’s not very legible, I ran into a width restriction, but you can basically make the names out.

Remember that the teams that are off by themselves are only by themselves because they don’t have beatwins to anyone in the Top 40. I ran it a few times just to be sure, but no matter what, I always seemed to get UCLA ranked #3. Their loss to Arizona made them lose credit for several beatwins, but they still had enough high quality wins to make them competitive with the other top teams. Their loss to USC only served to make sure they were ranked below USC. The top ten before bowl season:

And here’s the updated Top 40 graph after all the bowls: 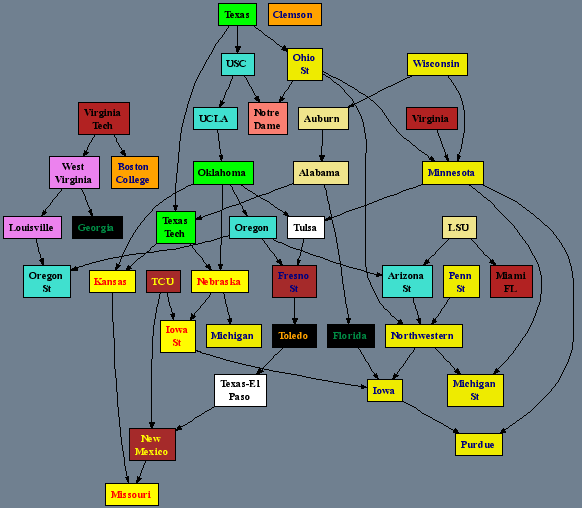 The previous week’s rankings guessed right on the following:

and guessed wrong on:

My powerbook crapped out creating the power rankings, but I might try again and update this entry later with the extra detail.